May 13, 2012 – GREECE – What may be lost in the noise that is the mainstream press is the fact that Greece has not been in a recession or even a depression, Greece has been in a state of slow motion economic collapse on the scale of past economic collapses such as that of Argentina but so far without the ability to default, devalue and inflate. As the below graph illustrates that following the financial crisis of 2008, Greece had been following a similar economic trend trajectory to that of most western economies including that of the UK, US and Germany, however the real crisis began in late 2009 when the economic recovery from the pit of the Great Recession of 2008-2009 evaporated and the Greek economy began a slow motion collapse that has so far seen Greek GDP in real terms contract by 16% since the 2008 peak, with no end in sight Unlike the V shape of the more regular debt default economic collapses such as that of Argentina’s of 2001 and more recently Iceland. The reason for this is solely due to Greece’s membership of the eurozone which has prevented Greece from defaulting on its debts since early 2010 and engaging in a sharp currency devaluation as markets would have corrected for the fact that Greece cannot compete against other countries. However instead of getting a grip on approx Euro 300 billion of public debt at that time, the Euro-zone despite since a 50% stealth default on private debt has still increased Greece’s total public debt burden by a further Euro 280 billion of 2 scheduled bailouts to stand at a total of over 400 billion Euro’s, leaving Greece far more indebted than where it were in late 2009 when economic collapse began, which is made infinitely worse as a consequence of the fact that Greece’s ability to service this debt has fallen as a consequence of the economic contraction. Similarly Greece as member of the Euro-zone has NOT had the option of experiencing a severe competitive devaluation of its currency of as much as 50% which would have instantly turned Greece’s trade imbalances around as Greece would no longer be importing goods and services from Germany that it could not afford as well as what little it does manufacture would have become far more attractive to export markets and especially its large tourism sector, which in fact as a consequence of a drop in demand suffered an increase in prices as a conse 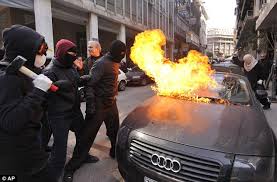 quence of fixed euro costs’ which resulted in further reduction in demand and hence Greece has been in an economic death spiral. The situation has now reached a critical point (though it has been at a critical point for a good 18 months now) where in my opinion Greece now has no alternative but to exit the Euro-zone (not European Union) and it will exit the Euro-zone sooner rather than later i.e. I would be surprised if Greece is still in the Euro-zone by the end of this year and most probable expect Greece to exit during the next few months (Summer 2012). Greece exiting the Euro-zone would crash the banking system as banks across the euro-zone start to fail domino style as a consequence of their direct exposure to 400 billion of Greek debt and counterparty risks which will put immediate pressure on all of the other weak Euro-zone members, with Spain and Portugal the next targets for exit as a consequence of these countries being on the same unserviceable debt fuelled economic collapse trajectories as Greece. In my opinion Spain and Portugal will both exit the Euro-zone within 6 months of Greece leaving so depending on the timing of Greece’s exit Spain and Portugal could also both leave the the eurozone this year. –Market Oracle

Leaders fear where Greece is headed: Speaking exclusively to The Sunday Telegraph, Theodoros Pangalos said he was “very much afraid of what is going to happen” after Greek voters rejected the deal in elections last Sunday. “In the places where the police voted, the fascists got 25 per cent,” he said. “They are a serious threat. They have used violence already – you don’t know where it will stop. “You know how it happened in Germany – it started with the Jews, then the Communists, then everybody – it could happen here. This is the country, after the Soviet Union and Germany itself, with the biggest percentage of [Second World War] casualties in its population. We will be in wild bankruptcy, out-of-control bankruptcy. The state will not be able to pay salaries and pensions. This is not recognized by the citizens. We have got until June before we run out of money.  –Telegraph

Government talks turn ugly: Greek politicians traded insults and accusations Sunday following an effort by President Karolos Papoulias to broker a coalition government, increasing the possibility of new elections in the debt-stricken country. Papoulias called together the leaders of the three biggest parties on Sunday, a week after indecisive elections and three failed attempts to form a government. A default by Greece could drag down other troubled governments such as Spain and Portugal. Europe is keeping a nervous eye on Greece, fearing that the political chaos there could lead to defaults on debt that could threaten the future of the euro. Greek failure — or refusal — to make debt payments could hurt banks across Europe. The eurozone economy is fragile, and any financial shock could plunge the region into a deep recession, a development that would ripple across the globe. A default by Greece also could drag down other troubled governments such as Spain and Portugal.  –CNN