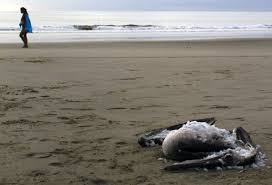 May 12, 2012 – CHILE – About 2,000 birds were found dead on beaches in central Chile, a natural history museum director said Friday, accusing fishermen of snagging them in their nets and letting them drown. CNN reports the number of dead birds could be as high as 2300. “It’s a horrible scene. They are spread across some six kilometers (four miles) of beach” around the coastal city of Santo Domingo, San Antonio natural history and archeology museum director Jose Luis Brito told UCV radio. Most of the birds are gray petrels, but there are also pelicans, gannets and Guanay cormorants. Brito accused fishermen of “doing nothing when birds get caught up in their nets, and leaving them to drown before throwing the bodies back into the sea.” The museum said it would file a complaint to police over the dead birds. About 100 bird carcasses were found on central beaches on Sunday. Thousands of dolphins and maritime birds, including many pelicans, have been found dead in neighboring Peru in recent weeks. Environmental groups blamed oil exploration work, but Peru’s deputy environment minister Gabriel Quijandria, disputed the claim and said warming waters, which disturbs food supplies, was a possible cause. –Physics