Posted on May 6, 2012 by The Extinction Protocol 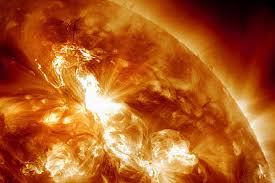 May 6, 2012 – SPACE – Future scenario: A stream of highly charged particles from the Sun is headed straight toward Earth, threatening to plunge cities around the world into darkness and bring the global economy screeching to a halt. This isn’t the premise of the latest doomsday thriller. Massive solar storms have happened before — and another one is likely to occur soon, according to Mike Hapgood, a space weather scientist at the Rutherford Appleton Laboratory near Oxford, England. Much of the planet’s electronic equipment, as well as orbiting satellites, have been built to withstand these periodic geomagnetic storms. But the world is still not prepared for a truly damaging solar storm, Hapgood argues in a recent commentary published in the journal Nature. Hapgood talked with The Times about the potential effects of such a storm and how the world should prepare for it. There can be a whole range of effects. The classic one everyone quotes is the effect on the power grid. A big geomagnetic storm can essentially put extra electric currents into the grid. If it gets bad enough, you can have a complete failure of the power grid — it happened in Quebec back in 1989. If you’ve got that, then you’ve just got to get it back on again. But you could also damage the transformers, which would make it much harder to get the electric power back. The storms can also disrupt communications on transoceanic flights. Sometimes when that happens, they will either divert or cancel flights. So that would be the like the disruption we had in Europe from the volcano two years ago, where they had to close down airspace for safety reasons. –KTUU