Poison skies: Hanging over Japan is a Fukushima nuclear crisis that’s far from over

Posted on April 26, 2012 by The Extinction Protocol 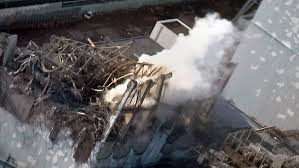 April 26, 2012 – JAPAN – Spent reactor fuel, containing roughly 85 times more long-lived radioactivity than released at Chernobyl, still sits in pools vulnerable to earthquakes. More than a year after the Fukushima nuclear power disaster began, the news media is just beginning to grasp that the dangers to Japan and the rest of the world are far from over. After repeated warnings by former senior Japanese officials, nuclear experts, and now a U.S. senator, it’s sinking in that the irradiated nuclear fuel stored in spent fuel pools amidst the reactor ruins pose far greater dangers than the molten cores. This is why:  Nearly all of the 10,893 spent fuel assemblies sit in pools vulnerable to future earthquakes, with roughly 85 times more long-lived radioactivity than released at Chernobyl. Several pools are 100 feet above the ground and are completely open to the atmosphere because the reactor buildings were demolished by explosions. The pools could possibly topple or collapse from structural damage coupled with another powerful earthquake. The loss of water exposing the spent fuel will result in overheating and can cause melting and ignite its zirconium metal cladding resulting in a fire that could deposit large amounts of radioactive materials over hundreds, if not thousands of miles. The stark reality, if TEPCO’s plan is realized, is that nearly all of the spent fuel at the Da-Ichi containing some of the largest concentrations of radioactivity on the planet will remain indefinitely in vulnerable pools. TEPCO wants to store the spent fuel from the damaged reactors in the common pool, and only to resort to dry, cask storage when the common pool’s capacity is exceeded. At this time, the common pool is at 80 percent storage capacity and will require removal of SNF to make room. TEPCO’s plan is to minimize dry cask storage as much as possible and to rely indefinitely on vulnerable pool storage. Sen. Wyden finds that that TEPCO’s plan for remediation “carries extraordinary and continuing risk” and sensibly recommends that “retrieval of spent fuel in existing on-site spent fuel pools to safer storage… in dry casks should be a priority.” –HP

Today, there is gre

at distrust of the safety of nuclear power plants has is seen worldwide. First Chernobyl then Fukushima forced a whole array of countries to reassess their attitude toward nuclear power. There have been no new nuclear plants built in the United States over the past 26 years. Now Germany, Switzerland, and Belgium will be shuttering their reactors. Spain is in the process of electing not building any new nuclear reactors, and Italy decided not to begin a nuclear energy industry at all.  In post-Fukushima Japan, only one reactor out of the country’s 54 is still running. The future of nuclear energy there is especially foggy as the wrecked reactors at Fukushima are in such a condition that they “temporarily or partially” re-achieve criticality – in other words, the emergency is not over. According to expert analysis, more than 30 years will be required to fully dismantle Fukushima. –Bellona

38 Responses to Poison skies: Hanging over Japan is a Fukushima nuclear crisis that’s far from over