Posted on April 26, 2012 by The Extinction Protocol 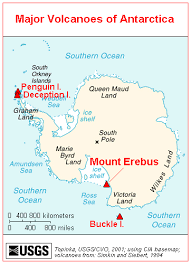 Major volcanoes of Antarctica: “Underwater volcanism is also sublimating portions of the Antarctica ice mass from underneath. In 2004, a research team led by Eugene Domack, aboard the research vessel Lawrence M. Gould, made a remarkable discovery of a massive underwater volcano off the coast of Antarctica using a deep water submersible vehicle equipped with a cadre of sensors and video cameras. The volcano was 2300 feet (700 meters) tall. The British team findings confirmed the volcano was still active and was contributing to the melting of the ice sheet from beneath the Antarctica land mass.”   –The Extinction Protocol, page 160 – 2010

29 Responses to Antarctic ice melting from below, reveals satellite