Stopping doomsday: what you haven’t been told about the Iran-Israeli crisis

Posted on April 20, 2012 by The Extinction Protocol

April 20, 2012 – JERUSALEM – The next three months could be extremely tense for the world, especially in the Middle East. The Russians have said that Israel will mount its attack on Iran by summer and Israel has itself stated, in so many words, that after May; the time of diplomacy and sanctions to work may be over. Are we approaching a singularity point in Jewish history? Perhaps so. It was reported by The Times of Israel that an attack on Iran would happen this summer as the article read: ‘A major Israeli TV station reported Sunday that the nation is gearing up for an attack against Iran this summer.” Whether this is misdirection or not; we’ll soon know but that is not so much an issue as the fact is that Israeli Prime Minister Benjamin Netanyahu said 2012 was the most important year in Israel’s history. There are some leaders inside the Jewish State that are quite frightened that Israel will face another holocaust scenario this year. The reason for the foreboding involves several factors which up to now haven’t been discussed much in the public. It’s quite creepy and it plays out something like this. There is considered to be a cursed date in Jewish history called the 9th of Av. On this date, in history, the Temple and most of Jerusalem was destroyed twice; once in 423 B.C. on the date by the Babylonians and again on the date by the Romans in 69 A.D. This is also the date for the Jewish expulsion from England in 1290, the Spanish Expulsion in 1492, and the date the generation was condemned to die in the desert in 1312 B.C. during the Exodus. Also, Betar, the last stronghold in the heroic Bar Kochba rebellion, also fell to the Romans on the 9th of Av of the year 3893 (133 CE) after 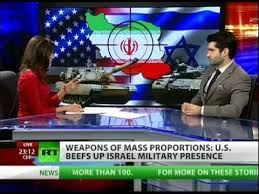 a three-year siege. 580,000 Jews died by starvation or the sword, including Bar Kochba, the leader of the rebellion. It is also said that on the 9th of AV, 1942, the Nazis turned on the gas chambers at Treblinka, Poland and the holocaust began. This year, the 9thof Av falls on July 28, 2012. The Shabbath also comes after the 64 year anniversary of Israel (May 14, 1948) as an independent state. In numerology, the number 64 is the symbol of paramount chaos. According to the gospel of Luke, there are 64 generations from Adam to Christ, the Messiah. The number is also connected to an end of the world myth. ‘The mathematician W. R. Ball reports the following legend: In a temple of Benares, there is a dome under which a plate of bronze marks the center of the world. On this plate, there are three vertical stems of one cubit height. During the creation of the world, God placed on one of the stems 64 discs of gold of different sizes, the largest at the base, the others going decreasing in the top, to the smallest disc. This accumulation is the tower of Brahma. Night and day, without stop, the priests relay to transfer the discs from a stem to another. Only one disc must be taken at once and it is forbidden to place a disc on another of lower diameter. When the 64 discs will be transferred from the tower of Braham to another stem, the temple and the Universe will crumble. This will be the end of the world.

Lastly, in a 1996 reference in the book The Bible Code by Michael Drosnin, the 9th of Av comes up again but this time the date comes up in conjunction with Jerusalem, Ariel, World War and ‘9th of Av is the day of the Third.’ The Bible Code says: “All through history, there have been a series of disasters that have befallen the Jews on that date, and it is so feared by the religious…And now, the Bible code stated that on the ‘9th of Av’ a third World War might start, with the third destruction of Jerusalem, a nulcear attack on Jerusalem. The ancient name for Jerusalem, ‘Ariel,’ the name used in the original warning of the Apocalypse, was in fact encoded between ‘World War’ and the ‘9th of Av is the day of the Third.‘  Whether any of this is true or not or just coincidence, it has created an underground climate of fear and apprehension in the State of Israel about the true intensions of Iran as this ‘dreaded’ date approaches. –The Extinction Protocol

73 Responses to Stopping doomsday: what you haven’t been told about the Iran-Israeli crisis