Posted on April 18, 2012 by The Extinction Protocol 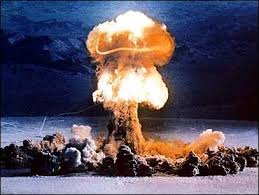 April 18, 2012 – ISRAEL – A nuclear bomb in Israel’s hands would deter the threat of a genocidal attack against the Jewish people, such as the one perpetrated by the German Nazi regime during the 1940s, a Knesset Channel poll revealed on Wednesday. The questionnaire, written by the Dahaf Insititute, asked respondents to relate to Israel’s ambiguous nuclear arsenal, and the effectiveness of nuclear deterrence against a second Holocaust, when Jews were systematically slaughtered in German-occupied Europe along with other minorities such as Roma people, homosexuals, people with disabilities and Jehova’s Witnesses. Of those questioned, 64% said they believed a nuclear bomb in Israeli hands could prevent a new Holocaust, while 29% said a nuclear weapon could not deter that threat. Israel, who is not party to the Nuclear Non-Proliferation Treaty, is widely believed to be the Middle East’s sole nuclear power, though Jerusalem neither confirms nor denies the presence of nuclear weapons in the Jewish state. While the context of the survey was grim, the poll also revealed a generally optimistic trend amongst the nation’s citizens. Only a slightly smaller number of respondents than those that believed an Israeli nuclear weapon was an effective deterrent said they thought the danger of a new Holocaust against the Jewish people was no longer relevant. The poll – which was published on the eve of the nationwide Remembrance Day for the Holocaust – showed that 60% of respondents believed there is no longer any danger of a new Holocaust, while 36% believed the danger is still pertinent. A majority of respondents said that a nuclear-armed Iran, considered by many in Israel to be the most hostile nation against the Jewish state, would threaten Israel’s existence. Some 74% said that Iran with a nuclear bomb is an existential threat to the State of Israel. Only 20% refuted that claim. –Jerusalem Post

Prime Minister Binyamin Netanyahu spoke at the Holocaust Remembrance Day ceremony at Yad Vashem on Wednesday saying that the Iranian regime was working in plain sight to destroy the people of Israel. Netanyahu stated that the Iranian regime was working to obtain nuclear weapons in order to carry out this goal. The prime minister rejected those who do not want him to speak of the Iranian threat as an existential threat, saying that Israel’s leaders had always been honest about the threats facing the state, citing David Ben-Gurion as an example. –JP