Double 8.6 and 8.2 strike ocean floor off the coast of Sumatra – tsuanmi warnings downgraded

Posted on April 11, 2012 by The Extinction Protocol 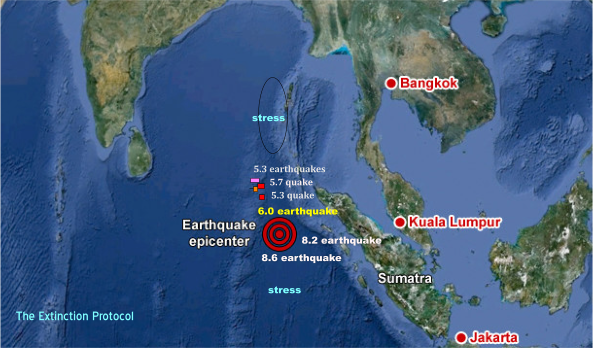 April 11, 2012 – INDONESIA – A massive earthquake struck off the coast of the Indonesian island of Sumatra on Wednesday afternoon, triggering a tsunami alert for the Indian Ocean. The quake struck about 434 kilometers (270 miles) southwest of Banda Aceh, the capital of Indonesia’s Aceh province, and had a magnitude of 8.6, the U.S. Geological Survey said. It took place at a depth of 23 kilometers (14 miles). The massive earthquake was followed by a 6.0 in the north Indian Ocean and then a 8.2 earthquake near the main epicenter. The tremor revived fearful memories of the catastrophic earthquake and tsunami in the region in 2004 that killed tens of thousands of people. The Pacific Tsunami Warning Center said Wednesday that it had issued a tsunami watch for the entire Indian Ocean, and the Indonesian Meteorology, Climatology and Geophysics Agency said it had put up a tsunami warning. The Indonesian president, Susilo Bambang Yudhoyono, said on local television that there were no reports of casualties or damage in Aceh so far. The areas most at risk of a tsunami are coastal areas of Aceh, particularly the island of Simeulue, Prih Harjadi, an official for the Indonesian geophysics agency said on Metro TV. The earthquake appears to have involved a horizontal movement rather than a vertical movement, so it is less likely that it will generate a tsunami, said Gary Gibson from the Seismology Research Center in Melbourne, Australia. He also said that the tremor took place a long way offshore and was therefore unlikely to have caused much damage itself. The power has gone out in Banda Aceh and residents are moving to higher ground, said Sutopo Purwo Nugroho, a spokesman for the Indonesian National Disaster Management Agency. The authorities in India’s Andaman and Nicobar Islands have ordered people to move out of low-lying areas. –CNN

65 Responses to Double 8.6 and 8.2 strike ocean floor off the coast of Sumatra – tsuanmi warnings downgraded