Posted on April 10, 2012 by The Extinction Protocol 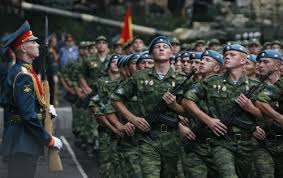 April 10, 2012 – IRAN – The Russian military anticipates that an attack will occur on Iran by the summer and has developed an action plan to move Russian troops through neighboring Georgia to stage in Armenia, which borders on the Islamic republic, according to informed Russian sources. Russian Security Council head Viktor Ozerov said that Russian General Military Headquarters has prepared an action plan in the event of an attack on Iran. Dmitry Rogozin, who recently was the Russian ambassador to the North Atlantic Treaty Organization, or NATO, warned against an attack on Iran. “Iran is our neighbor,” Rogozin said. “If Iran is involved in any military action, it’s a direct threat to our security.” Rogozin now is the deputy Russian prime minister and is regarded as anti-Western. He oversees Russia’s defense sector. Russian Defense Ministry sources say that the Russian military doesn’t believe that Israel has sufficient military assets to defeat Iranian defenses and further believes that U.S. military action will be necessary. The implication of preparing to move Russian troops not only is to protect its own vital regional interests but possibly to assist Iran in the event of such an attack. Sources add that a Russian military buildup in the re

gion could result in the Russian military potentially engaging Israeli forces, U.S. forces, or both. Informed sources say that the Russians have warned of “unpredictable consequences” in the event Iran is attacked, with some Russians saying that the Russian military will take part in the possible war because it would threaten its vital interests in the region. The influential Russian Nezavisimaya Gazeta newspaper has quoted a Russian military source as saying that the situation forming around Syria and Iran “causes Russia to expedite the course of improvement of its military groups in the South Caucasus, the Caspian, Mediterranean and Black Sea regions.” This latest information comes from a series of reports and leaks from official Russian spokesmen and government news agencies who say that an Israeli attack is all but certain by the summer. Because of the impact on Russian vital interests in the region, sources say that Russian preparations for such an attack began two years ago when Russian Military Base 102 in Gyumri, Armenia, was modernized. It is said to occupy a major geopolitical position in the region. –Business Insider