The Republic’s collision course with Islam: Is France headed for another revolution?

Posted on April 7, 2012 by The Extinction Protocol 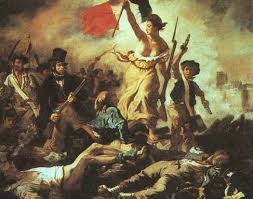 April 7, 2012 – PARIS, FR – Islamist groups in France want to avenge the death of a Muslim radical who was killed by police, prompting France to exercise vigilance, the country’s interior minister said Friday. Claude Gueant said French authorities have noticed a “renewed enthusiasm” and “a desire to avenge” the death of Mohammed Merah. He said some radical Muslims may follow in Merah’s footsteps and “become a martyr.” Merah, a French citizen of Algerian origin, was suspected of killing seven people before he himself died last month in a 32-hour siege of his apartment in the southwestern city of Toulouse. “We have to be vigilant,” Gueant said on French radio Europe 1. Gueant’s comments come amid a widening security crackdown in the aftermath of the horrific shooting spree. Ten suspected Islamists were arrested in fresh raids across France on Wednesday, and 13 alleged radicals arrested a week ago were placed under formal investigation for “criminal conspiracy in connection with a terrorist enterprise” and possession and transportation of weapons, officials said. Nine of the 13 have been jailed, including Mohamed Achamlane, leader of the Islamist group Forsane Alizza, reportedly linked to Merah. French prosecutor Francois Molins said the detained radical Muslims were preparing for holy war. Forsane Alizza and Achamlane were “calling for the establishment of an Islamic caliphate in France and calling for the implementation of Sharia law and inciting Muslims in France to unite for the preparation of a civil war,” a Paris prosecutor said. The Interior Ministry announced Monday it had deported two Muslims and plans to expel three more. –CNN

11 Responses to The Republic’s collision course with Islam: Is France headed for another revolution?