Posted on March 20, 2012 by The Extinction Protocol 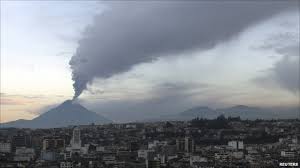 March 20, 2012 – ECUADOR – Another series of explosions has occurred early today at Tungurahua volcano in Ecuador, the Instituto Geofísico (IG) reports. The eruption was reported to be very noisy and caused minor ash fall in nearby villages, but no damage. From 23:39 (local time) on March 19, a rapid increase of tremor was detected and observers reported roaring noises from the volcano in up to 14 km distance. About an hour after the onset of tremor reports of ash fall came from El Manzano and Choglontús. At 00h22 today, there was an loud explosion whose cannon-shot like shock wave was heard in Choglontús, El Manzano and Puntzán. Incandescent lava bombs could be seen ejected from the summit crater and landing up to approx. 200 m distance on the upper slope. From the 01h08 (local time) tremor decreased and also the noises from the volcano. Cloud cover prevented detailed observations this morning. According to a first analysis, only the south-west sector received ash fall. In the Choglontús area, ash continued to fall until 07:00 (local time) and was measured to have accumulated 383 grams per square meter, corresponding to less than 1 mm of ash. –Volcano Discovery