Obama draws line in the sand with Iran: No nukes, and ‘I’m not bluffing’

Posted on March 2, 2012 by The Extinction Protocol 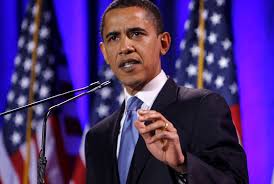 March 2, 2012 – WASHINGTON – President Barack Obama says he isn’t bluffing when he says Iran shouldn’t have a nuclear weapon, but he cautions against a premature Israeli strike against the Islamic republic. “At a time when there is not a lot of sympathy for Iran and its only real ally, (Syria,) is on the ropes, do we want a distraction in which suddenly Iran can portray itself as a victim?” he said this week in an interview with the Atlantic. Obama, who will be meeting Israeli Prime Minister Benjamin Netanyahu on Monday, said a permanent solution is necessary. “The only way historically that a country has ultimately decided not to get nuclear weapons without constant military intervention has been when they themselves take (nuclear weapons) off the table. That’s what happened in Libya, that’s what happened in South Africa,” Obama said. Obama said Iran and Israel understand that he isn’t bluffing about his opposition to an Iranian nuclear weapon. “I think that the Israeli government recognizes that, as president of the United States, I don’t bluff,” he said. “I also don’t, as a matter of sound policy, go around advertising exactly what our intentions are. But I think both the Iranian and the Israeli governments recognize that when the United States says it is unacceptable for Iran to have a nuclear weapon, we mean what we say.” Obama said he’s not going to take “any option off the table and will pressure Iran until it “takes a different course.” He stressed the importance of political, diplomatic, and economic sanctions against Iran. He said the West has a “sanctions architecture that is far more effective than anybody anticipated” and tough sanctions “put a world of hurt on them.” Preventing Iran from getting a nuclear weapon isn’t just in the interest of Israel, it is profoundly in the security interests of the United States,” he said. Obama emphasized the risks of Iran obtaining a nuclear weapon. He said it would “run completely contrary to my policies of nonproliferation. The risks of an Iranian nuclear weapon falling into the hands of terrorist organizations are profound. It is almost certain that other players in the region would feel it necessary to get their own nuclear weapons,” Obama said. –CNN

5 Responses to Obama draws line in the sand with Iran: No nukes, and ‘I’m not bluffing’