Posted on January 27, 2012 by The Extinction Protocol 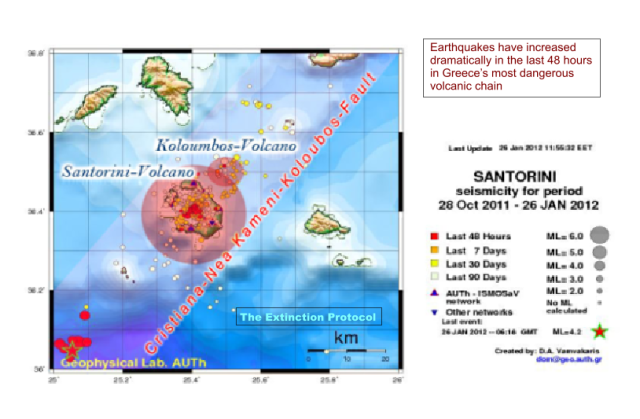 January 27, 2012 – GREECE – Crete has been hit with a second 5.2 earthquake in 24 hours. After a serial of strong earthquakes on 26 January the Greeks begin to take the seismic development around an under Santorini serious. Today there have been several earthquakes south-west of Santorini on the Christiana-Kameni-Koloumbos-Fault starting with 5.2 R, 4,2 R end 3,2 R. It is a logic development that helps a magma chamber uprising. The status of the Nea Kameni volcano remains still at “yellow”, but we have to expect something. The team of VolcanoDiscovery is already prepared for a possible volcanic activity. It is not a danger to the tours, because there is a safe distance from the island Nea Kameni (the volcano) to the main part of the island (Thira). We watch the seismic activity on a daily base and will start an excursion from the time we will see a suddenly much higher rate of earthquakes on the island. –Volcano Discovery

12 Responses to Santorini comes under close observation after Crete rattled by second 5.2 earthquake