Bárðarbunga: more seismic unrest at another one of Iceland’s large volcanoes

Posted on December 21, 2011 by The Extinction Protocol

December 21, 2011 – ICELAND – During the night there was an small earthquake swarm in Bárðarbunga volcano. The largest earthquake in this earthquake swarm was ML 3.04 in magnitude. It had the depth of 8.5 km. This might have been a dike intrusion. But it is hard to know that for sure at the moment. This earthquake swarm only lasted for an about 2 to 3 hours before it stopped. –Jonfr

The next series of eruptions at Bardarbunga could of course happen anywhere, but the recent earthquakes indicate that an eruption could take place in a similar location to in the 18th Century. There are signs that magma is rising at great depth underneath the Bardarbunga volcanic centre. A future eruption under the glacier would be accompanied by a jökulhlaup, most likely in Kreppa and Jokulsa a Fjollum. The volcano is capable of producing a VEI6 eruption. Tephra would also likely be produced – possibly in large quantities. There are also other possibilities, for example an eruption in the southern part of the system, but for now geologists at the Icelandic Meteorological Office are stressing that the earthquakes do not mean that an eruption is imminent. –Ice News  February 19, 2011 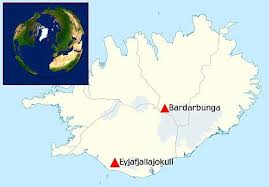 The stratovolcano of Bárðarbunga, with its 2009 meters in height, is not only Iceland’s second highest mountain, but it is also part of Iceland’s largest volcanic system (Iceland East Volcanic Zone or EVZ) which extends for more than 200 kilometers and which includes also the nearby Grimsvötn — direct interaction among these two volcanoes is believed to exist. Bárðarbunga’s crater, measuring 70 square kilometers in width and 700 in depth, is entirely covered in ice, making observation of seismic phenomena in the area more difficult. Although sustained activity has been frequently noted, eruptions are quite rare, making this volcano relatively lesser known. The last eruptive episode of Bárðarbunga took place in 1903, but the last major outbreak dates back to 1477. This infamous event produced the largest known lava flow — more than 21 cubic kilometers in volume — of the past 10,000 years. –Iceland Chronicles

10 Responses to Bárðarbunga: more seismic unrest at another one of Iceland’s large volcanoes