Breakout: China to establish its first military base abroad in the Indian Ocean

Posted on December 13, 2011 by The Extinction Protocol 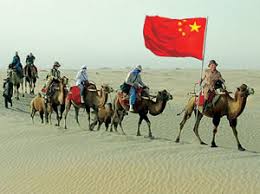 December 13, 2011 – BEIJING – China on Monday announced that it will set up its first military base abroad in the Indian Ocean island of Seychelles to “seek supplies and recuperate” facilities for its Navy, which may cause unease in India. The base in Seychelles is regarded significant by analysts as China is about to launch its first aircraft carrier. It is currently undergoing final trials. The decision to establish its first naval base abroad was taken during Chinese Defense Minister Gen Liang Guanglie’s goodwill visit to Seychelles earlier this month. During the visit, Seychelles Foreign Affairs Minister Jean-Paul Adam said his country has invited China to set up a military base on the archipelago to beef up the fight against piracy. “For the time being China is studying this possibility because she has economic interests in the region and Beijing is also involved in the fight against piracy,” he said. General Liang, who arrived in Victoria on Thursday with a 40-strong delegation, had been invited in October by Seychelles President James Michel, when he was on a visit to China. During Liang’s visit, the two sides exchanged views on their countries’ and armies’ cooperation, as well as on the global and regional situation, a media report said. China has already cemented its foothold in the Indian Ocean by signing contract with the UN backed International Seabed Authority to gain rights to explore polymetallic sulphide ore deposit in Indian Ocean over the next 15 years. ‘Together, we need to increase our surveillance capacity in the Indian Ocean… as Seychelles has a strategic position between Asia and Africa,’ Michel said in statement, adding that China had given its army two light aircraft. The two countries signed a military cooperation agreement in 2004 that has enabled some 50 Seychelles soldiers to be trained in China. They renewed their agreement on Friday, with China to provide further training and equipment. –Truth Dive

Check: “In July of 2010, American submarine deployments off China’s coast were made public. No one will be surprised when Chinese submarines surface off the eastern seaboard of the U.S. The stakes in the U.S. – China proxy war are precipitously rising and only time will tell who will inflict the next blow and how dangerously close it will push the two nations to a direct confrontation…What will the U.S. do when China outgrows its dog house and began to colonize its interests around the world?” – (c) The Extinction Protocol, page 55

9 Responses to Breakout: China to establish its first military base abroad in the Indian Ocean