Posted on November 18, 2011 by The Extinction Protocol 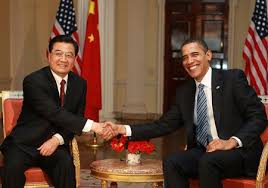 November 18, 2011 – BEIJING – Tensions between the United States and China spilled over into meetings of Asia-Pacific leaders on Friday as the two countries jostled over how to handle competing claims to the South China Sea. Chinese Premier Wen Jiabao said “outside forces” had no excuse to get involved in the complex maritime dispute, a veiled warning to the United States and other countries to keep out of the sensitive issue. “It ought to be resolved through friendly consultations and discussions by countries directly involved. Outside forces should not, under any pretext, get involved,” Wen told a meeting with Southeast Asian leaders, several of whose countries claim sovereignty to parts of the South China Sea. The remark is the latest barb between the two countries in recent weeks, and comes as President Barack Obama has sought to reassert U.S. presence in the Asia-Pacific to counter the growing influence of the world’s second-largest economy, China. Obama said in Australia on Thursday, on his last stop before jetting to the Asia meetings in neighboring Indonesia, that the U.S. military would expand its Asia-Pacific role, declaring America was “here to stay” as a Pacific power. Vietnam, the Philippines, Taiwan, Malaysia and Brunei are the other claimants to parts of the South China Sea, a major route for some $5 trillion in trade each year and potentially rich in resources. The Southeast Asian countries along with the United States and Japan, are pressuring China to try to seek some way forward on the knotty issue of sovereignty, which has flared up again this year with often tense maritime stand-offs that an Australian think tank said could lead to conflict. –Reuters excerpt

16 Responses to U.S.-China tensions spill over into Asian summit