Posted on October 30, 2011 by The Extinction Protocol

October 30, 2011 – The Earth’s magnetic field is produced by the flow of liquid iron within its core, three thousand kilometers below our feet. What made researchers think of a link between plate tectonics and the magnetic field? The discovery that convective liquid iron flows play a role in magnetic reversals: experiments and modeling work carried out over the last five years have in fact shown that a reversal occurs when the movements of molten metal are no longer symmetric with respect to the equatorial plane. This “symmetry breaking” could take place progressively, starting in an area located at the core-mantle boundary (the mantle separates the Earth’s liquid core from its crust), before spreading to the whole core (made of molten iron). Extending this research, the authors of the article asked themselves whether some trace of initial symmetry breakings behind the geomagnetic reversals that have marked the Earth’s history, could be found in the only records of large-scale geological shifts in our possession, in other words the movements of continents (or plate tectonics). Some 200 million years ago, Pangaea, the name given to the supercontinent that encompassed almost all of the Earth’s land masses, began to break up into a multitude of smaller pieces that have shaped the Earth as we know it today. By assessing the surface area of continents situated in the Northern hemisphere and those in the Southern hemisphere, the researchers were able to calculate a degree of asymmetry (with respect to the equator) in the distribution of the continents during that period. 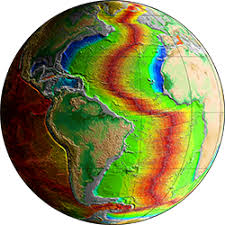 In conclusion, the degree of asymmetry has varied at the same rhythm as the magnetic reversal rate (number of reversals per million years). The two curves have evolved in parallel to such an extent that they can almost be superimposed. In other words, the further the centre of gravity of the continents moved away from the equator, the faster the rate of reversals (up to eight per million years for a maximum degree of asymmetry). What does this suggest about the mechanism behind geomagnetic reversals? The scientists envisage two scenarios. In the first, terrestrial plates could be directly responsible for variations in the frequency of reversals: after plunging into the Earth’s crust at subduction zones, the plates could descend until they reach the core, where they could modify the flow of iron. In the second, the movements of the plates may only reflect the mixing of the material taking place in the mantle and particularly at its base. In both cases, the movements of rocks outside the core would cause flow asymmetry in the liquid core and determine reversal frequency. –Physics