Posted on October 15, 2011 by The Extinction Protocol 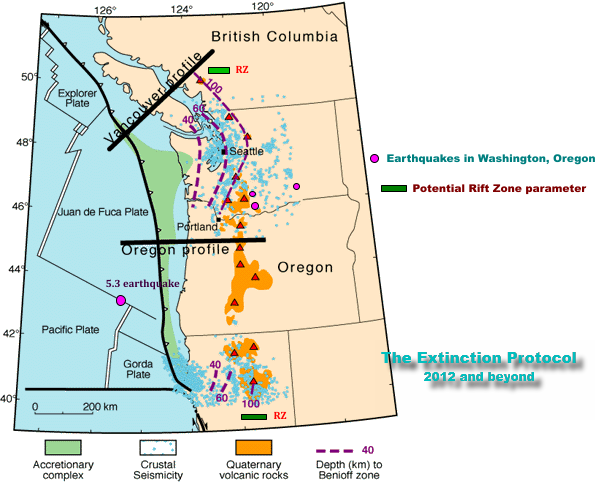 October 15, 2011 – SEATTLE – Washington has been hit by three earthquakes in four hours. Two of the quakes were in the 3.4 magnitudes and very shallow- ranging in depth from 8.5 to 1.4 km. There was also a 2.9 magnitude earthquake, less than 1 km in depth, near Mt. Rainer. Mount Rainier is a massive stratovolcano located 54 miles (87 km) southeast of Seattle in the state of Washington, United States. It is the most topographically prominent mountain in the contiguous United States and consequently the Cascade Volcanic Arc, with a summit elevation of 14,411 feet (4,392 m). Mt. Rainier is considered one of the most dangerous volcanoes in the world, and it is on the Decade Volcano list of potentially catastrophic volcanoes that could erupt with very deadly consequences. Because of its large amount of glacial ice, Mt. Rainier could potentially produce massive lahars that would threaten the whole Puyallup River valley. The last eruption of Mt. Rainer occurred in 1894. Recently, the icy summit has been stirred by tremors which again portends the fact that the northwest quadrant of the U.S. is becoming more geologically active. On September 9th, a 6.4 magnitude earthquake struck off the coast of Vancouver Island and recently, a 5.3 earthquake struck the off the coast of Oregon on October 13, 2011. On April 6, a massive undersea eruption occurred and was later discovered by Oregon State University geologist Bill Chadwick in August. The eruption produced a lava flow 1.2 miles wide. Also in September of this year, scientists discovered a 32.2 km (20 mile) long fault under Mt. Hood in Oregon that was capable of generating a magnitude 6 or 7 earthquake. Scientists believe a 9.0 earthquake is long overdue for the Cascadia Subduction Zone of the Northwest but ultimately, the geological change potentially facing the region could be something even more dramatic. In 2009, New Zealand geologists discovered preliminary evidence which suggested the volcanic mountains of Washington might all be linked by a common magma pool. (See diagram below).The almost linear volley of volcanoes strewn across the northwest U.S. corridor from Northern California to Washington, may suggest the entire region could be susceptible to cascading fissure tear eruptions from the strait of San Juan de Fuca to northern California if the entire region was thrown into upheaval from a series of major earthquakes. Admittedly, this is a worst-case scenario that could only be triggered by a string of very large continuous earthquakes and such a catastrophe may never happen but it does highlight some of the potential dangers of the underlying hazardous faults and volcanic systems buried in the region.1 –The Extinction Protocol

1. Magma pool under the Washington moutains?