Posted on September 30, 2011 by The Extinction Protocol 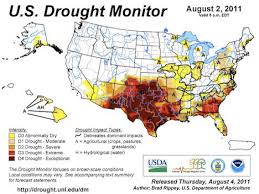 September 30, 2011 – AUSTIN (AP) – The state climatologist for Texas says the record drought of 2011 could be only the beginning of a dry spell that could last until 2020. State climatologist John Nielsen-Gammon tells the Austin American-Statesman says water planning is often based on standards set by the previous record drought of the 1950s, which lasted nearly 10 years. Nielsen-Gammon, who also is a Texas A&M professor of atmospheric sciences, says the present drought could be significantly longer-lasting than what has been planned for. He says that, “sooner or later, there will be a drought that’s worse” than the previous standard-setter. Forecasters predict dry weather to last long-term beyond the next decade from the La Nina phenomenon returning in 2012 to cool the surface waters of the eastern tropical Pacific Ocean. –CBS

The map to the left shows the largest underground aquifer in Texas. It’s called the Ogallala Aquifer or High Plains Aquifer. It is a vast, yet shallow underground water table aquifer located beneath the Great Plains in the United States. Ogallala is one of the world’s largest aquifers. It covers an area of approximately 174,000 mi² (450,000 km²) in portions of the eight states of South Dakota, Nebraska, Wyoming, Colorado, Kansas, Oklahoma, New Mexico, and Texas. More than 14 million hectares of land are irrigated by the Ogallala. If you overlay the red drought striken area over the aquifer map- one can see the future potential magnitude of the problem for the state if Texas is deprived of sufficient rainfall or a major water table for the next 9 years. Ogallala could face major ecological stress in a prolonged drought scenario. Water scarity could easily transform the state into more of an arid region over the next decade under such circumstances, especially if the state’s population continues to swell and the state’s underground water resources are mismanaged. The state of Texas covers 23 aquifers (7 major and 16 minor aquifers) that underlie approximately ¾ of the state. The Ogallala Aquifer accounts for about 90% of the water in all of Texas aquifers. Groundwater from Texas aquifers is used for irrigation, municipal use, manufacturing, and livestock production. Pumping of water from many aquifers in Texas has resulted in a significant lowering of the water table.  –The Extinction Protocol