Posted on September 23, 2011 by The Extinction Protocol 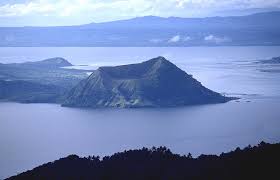 September 23, 2011 – MANILA – Taal Volcano showed signs of activity as state volcanologists recorded seven quakes there in the last 24 hours. In its Friday update, the Philippine Institute of Volcanology and Seismology (Phivolcs) said two of the quakes occurred Thursday night. “Two of these events which occurred at 6:34 p.m. and 7:30 p.m. (Thursday) were felt at Intensity II by residents in Barangay Calauit in the southeastern part of the Volcano Island,” it said. Phivolcs had recorded only one volcanic quake in the area in the previous 24 hours. But Phivolcs maintained Alert Level 1 remains in effect over Taal Volcano. “This means that hazardous eruption is not imminent. The public, however, is reminded that the Main Crater should be strictly off-limits because sudden steam explosions may occur and high concentrations of toxic gases may accumulate,” it said. It added the northern portion of the Main Crater rim, in the vicinity of Daang Kastila Trail, may also become hazardous when steam emission along existing fissures suddenly increases. Also, it reminded the public that the entire Volcano Island is a Permanent Danger Zone (PDZ), and permanent settlement in the island is strongly not recommended. Phivolcs, meanwhile, said three volcanic quakes were recorded at Bulusan Volcano in Sorsogon in the last 24 hours. Wispy to weak steaming was observed on the summit crater and thermal vents known, it added. Alert Level 1 remains over Bulusan Volcano, meaning current volcanic activity is driven by shallow, hydrothermal processes. –GMA

Katla rumbles: An earthquake measuring just below three points on the Richter scale was picked up by sensors north of Godabunga in Mýrdalsjökull glacier in south Iceland, which covers the volcano Katla, at 6:57 this morning. A smaller aftershock was registered three minutes later but no further seismic activity has occurred in the glacier since. There has been considerable activity in the area this summer and the quakes this morning are considered part of this continued unrest. However, it is not possible to confirm whether the last tremors may lead to something bigger. Katla is under close observation and the inhabitants of Vík are prepared to evacuate in case of glacial flooding. –Iceland Review

8 Responses to Seismic unrest reported at Iceland and Philippine volcanoes