6.2 magnitude earthquake strikes off the coast of Japan

Posted on September 16, 2011 by The Extinction Protocol 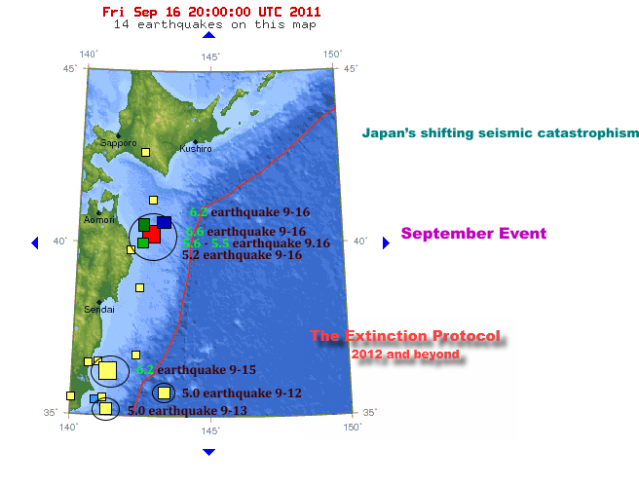 September 16, 2011– JAPAN – This map shows the latest breakout of earthquakes and reveals the amount of seismic stress being unleashed off the coast of the Japanese mainland. The 6.2 magnitude earthquake is the 16th major (6.0 +) earthquake to strike in the month of September. –The Extinction Protocol

TOKYO — A strong 6.6-magnitude undersea quake and a series of aftershocks hit off the coast of Japan’s Honshu island Saturday, not far from the area ravaged by a huge March quake and tsunami, geologists said. There were no immediate reports of damage or casualties and no widespread tsunami warning, although the initial earthquake was followed by four more quakes, one of them coming in at magnitude 6.2. The United States Geological Survey (USGS) said the first, 36.2-kilometre (22.6-mile) deep quake hit 108 kilometres east-south-east of the coastal town of Hachinohe, 574 kilometres from Tokyo, at 4:26 am (1926 GMT Friday). The Pacific Tsunami Warning Center said that “no destructive widespread tsunami risk exists based on historical earthquake and tsunami data.” But it said that quakes of this size sometimes generate local tsunamis. “Authorities in the region of the epicentre should be aware of this,” the centre said in a statement. The Japan Meteorological Agency said that there might be some changes in sea levels due to the first earthquake, but that there were no reports of damage or casualties and none were expected, according to the Kyodo news agency. It said the initial quake jolted Iwate prefecture, an area badly hit by the 9.0-magnitude earthquake and tsunami on March 11 that left almost 20,000 dead or missing and sparked the worst nuclear crisis since Chernobyl. The 6.6-magnitude quake was followed by a smaller, 5.2-magnitude tremor, 10.4 kilometres deep and 46 kilometres from Hachinohe at 4:39 am (1939 GMT Friday), then a third, 5.5-magnitude quake at 6:11 am (2011 GMT Friday), this time at a depth of 19 kilometres, 144 kilometres from Hachinohe. The fourth quake struck at 7:08 am (2108 GMT Friday), with a magnitude of 6.2 at a depth of 20.2 kilometres, 137 kilometres east-south-east of Hachinohe. Again, no widespread tsunami warning was issued. At 07:36 (2136 GMT), a 5.6-magnitude quake hit at a depth of 17.6 kilometres, 161 kilometres east-south-east of Hachinohe, USGS said. Japan, located on the tectonic crossroads known as the “Pacific Ring of Fire” and dotted with volcanoes, is one of the world’s most quake-prone countries. –AFP

19 Responses to 6.2 magnitude earthquake strikes off the coast of Japan