Posted on September 15, 2011 by The Extinction Protocol 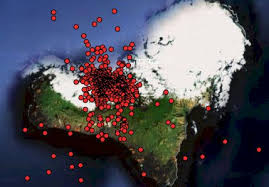 September 15, 2011 – CANARY ISLANDS – The Canary Islands Government says it has commenced an in-depth geological survey of El Hierro, the smallest of the islands, in an effort to determine the source of an earthquake swarm. The unprecedented seismic activity commenced on 19 July. In excess of 6,000 earthquakes have been recorded up to 14 September 2011. More than two dozen tremors were recorded during Wednesday (14 Sept.) alone. The vast majority of the tremors have been recorded in the northwest of the 278.5-square-kilometre island at El Golfo, the location of a massive landslide that created a 100-metre high tsunami almost 50,000 years ago. The earth tremors have ranged between 1 and 3 magnitude, the National Geographic Institute (IGN) reported. However, the Volcanological Institute of the Canary Islands and Actualidad Volcánica de Canarias have both reported a sizeable decrease in the number of tremors recorded during the first two weeks of September, compared to the latter half of August. The National Geographic Institute confirmed on Wednesday that it has commenced a geological study of the epicentre of the tremors in the town of Frontera. Local officials admitted that the origin of the seismic movements could be volcanic, but further examination is required. The Council of Hierro noted that there is no imminent threat to the residents of the sparsely populated island (10600 inhabitants), but refused to rule out an evacuation of island residents in the event of a heightened risk of a volcanic eruption. The earthquake swarm, prompted the Canary Islands Government to convene the first ever meeting on 22 July of the Steering Committee and Volcanic Monitoring, reflected in the Specific Plan Protection Civil and Emergency for Volcanic Risk, given what it described “the significant increase in seismic activity.” The Committee has met numerous times since then to discuss the low magnitude seismic activity. It reported on Monday that it had stepped up its seismic monitoring operations to identify the source of the earthquakes. It remains unclear if the unprecedented seismic activity on El Hierro is a precursor to a possible future increase in earthquake or volcanic activity.  However, the latest surge in recorded earthquakes and the inflation of the volcano could indicate magma rising underneath El Hierro. –IWO