Posted on September 11, 2011 by The Extinction Protocol 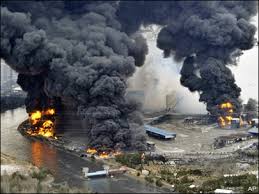 September 11, 2011 – ZURICH – Record earthquake losses following the temblors in Japan and New Zealand may make 2011 the second- costliest year in history for insured catastrophe losses, according to Swiss Re Ltd. Total insured losses from natural catastrophes and man-made disasters reached about $70 billion in the first half of this year, more than double the losses in the same period in 2010, according to estimates by the Zurich-based reinsurer. The figure was only surpassed in 2005 after hurricanes Katrina, Wilma and Rita caused claims of more than $90 billion, the world’s second-biggest reinsurer said. Catastrophe claims usually increase in the second half of the year with the hurricane season in the North Atlantic and typhoons in the northwest Pacific. “Additional claims from the ongoing U.S. hurricane season or expensive winter storms in Europe have the potential to bring figures for the full year even closer to the record claims” of 2005, Thomas Hess, Swiss Re’s chief economist, said in an e- mailed statement. Hurricane Irene, which made landfall Aug. 27 as a Category 1 hurricane in North Carolina before striking New York the next day as a tropical storm, may result in insured damages of up to $6.6 billion, Aon Benfield, the world’s biggest reinsurance broker, said yesterday. –Bloomberg

20 Responses to Earthquakes may make 2011 second-costliest year, Swiss Re says