Posted on September 8, 2011 by The Extinction Protocol 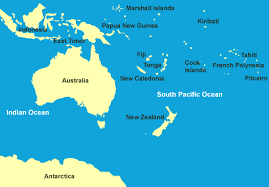 September 8, 2011 – SOUTH PACIFIC – The small Pacific island nation of Kiribati says it’s considering building what it describes as ‘floating islands’ to deal with rising sea levels. The president of Kiribati, Anote Tong, put forward the idea at the Pacific Islands Forum in New Zealand where regional leaders are meeting to discuss ways to deal with climate change. The meeting was hosted by New Zealand Prime Minister John Key, who urged delegates to work together to solve the region’s common problems. Sea-level rise has been a particular concern to low-lying Kiribati, and Tong said it’s not a question of adapting to a new environment but rather a matter of survival. “We’re considering everything including floating islands, including everything, because we are running out of options,” he told the Australian Broadcasting Corp. “The concept is that it would be something like drilling — oil drilling rigs, OK? I’ll ask you the question: If you’re faced with the option of being submerged with your family what would you do? Would you jump on the rig like that on a floating island or not? “And I think the answer is yes.” Tong said such a plan would cost about $2 billion, money that would have to come from the international community. –Terra Planet