Posted on August 17, 2011 by The Extinction Protocol 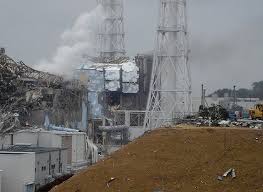 August 17, 2011 – FUKUSHIMA (Kyodo) — Excessive levels of radioactive cesium were found in sludge in a ditch at a district court branch in Fukushima Prefecture, about 100 kilometers west of the crippled Fukushima No. 1 nuclear power plant, the court said Tuesday. The isotope in the sludge, sampled from a ditch at the Fukushima District Court’s Aizuwakamatsu branch, measured about 186,000 becquerels per kilogram, the court said, adding it plans to remove the sludge after consulting with local governments. Under government standards, sludge can be used in a landfill as long as the radioactive cesium contained in it measures 8,000 becquerels per kilogram or lower. The court has barred entry within 1 meter of the area where the sludge was sampled and another where radiation levels were higher than other locations on the premises, but that has not disrupted court business, it said. The nuclear power plant, operated by Tokyo Electric Power Co., spewed massive amounts of radioactive materials into the air and ocean after a series of explosions that followed the March earthquake and tsunami. –Mainichi Japan