The Santa Barbara volcanic cliffs are smoldering once again

Posted on August 16, 2011 by The Extinction Protocol 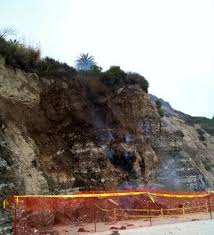 August 16, 2011 – SANTA BARBARA, CA. – Vesuvius, Krakatoa, Mt. St. Helens—names that conjure up images of searing heat, smoke, ash, and rivers of molten lava. Now, what about Rincon or Hope Ranch? The South Coast is not usually associated with volcanoes, but there were indeed such phenomena of a sort in our area. Actually these were not volcanos, but solfataras or fire wells, volcano-like fissures that give off sulfurous gases and steam. The first mention of the Rincon “volcano,” near the present border of Santa Barbara and Ventura counties, appeared in a report written by José María Garcia about a trip in 1835 from Mission San Fernando Rey in the San Fernando Valley to Mission La Purísima near today’s Lompoc. The site, on the cliff side overlooking the beach, then basically disappears from the historical record until the 1870s, when two oil prospectors, digging an exploratory tunnel, rediscovered it. The oilmen excavated down some 250 feet, temperatures climbing as they dug, and they eventually had to abandon the project. The volcano became a bit of a tourist attraction in the 1880s, as the stagecoach route at that time went along the beach right by the site. The height of the volcano’s activity was in the early 1880s, when flames 10 feet high were reported, and rocks were flung into the air. One observer described the sulfurous gases as “almost suffocating.” This, plus the deep beach sands and the dangers of high tides and storms, must have made for quite the adventurous ride for stagecoach passengers. The Rincon volcano settled down soon after; nevertheless, one enterprising gentleman still tried to turn a quick buck by charging admission to the volcano.

He ran a pipe to one of the fissures from a hidden stove where he planned to burn soap fat to “fire up” the volcano. The disagreeable odor of the burning fat would replace the missing smell of the sulfur. The charlatan was discovered, and his scheme unraveled. As late as the 1940s, smoke and steam still issued from the fissures, but today, the Rincon volcano is completely dormant. In a letter dated September 6, 1784, Pedro Fages, at the time governor of Alta and Baja California, described an “active volcano” halfway between Santa Barbara and the large Chumash settlement on Mescaltitlan Island in the Goleta Slough. In another letter a year later, Fages wrote, “Throughout this site, the ground is so hot one cannot approach it; it burns continuously in more than 30 places, like geysers that exude dense smoke. From its stench it appears to be from sulfur …” Another observer later wrote, “… the ground is so covered with ashes that one cannot approach it without being half-buried. … Small flames issued from the mouth from time to time.” The fissures of this Hope Ranch volcano ran some 200 feet from the beach up the cliff to the bluff top. Observers noted that when the rocks were initially submerged in a high tide, much steam was produced. The active area took up about a quarter of an acre. The volcano could be quite dramatic at night, giving off the orange glow of live coals. Located about a half a mile west of Arroyo Burro Beach near today’s Sea Ledge Lane, the site is now quiet. In 1920, some of the residents of the growing and affluent Hope Ranch community, fed up with the stench and the steady flow of curiosity seekers and fearful of the fire danger, had a water pipe run to the fissure. A pond was created over the area and, after several weeks the water apparently extinguished the subterranean fires. It doesn’t appear Santa Barbara will suffer the fate of Pompeii anytime soon. –Independent, August 16, 2011