Posted on February 22, 2011 by The Extinction Protocol 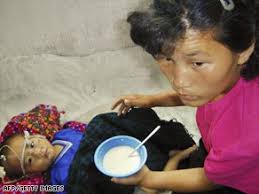 February 22, 2011 – SEOUL – North Korea recently took the unusual step of begging for food handouts from the foreign governments it usually threatens, South Korea. Plagued by floods, an outbreak of a livestock disease and a brutal winter, the government ordered its embassies and diplomatic offices around the world to seek help. The request has put the United States and other Western countries in the uncomfortable position of having to decide whether to ignore the pleas of a starving country or pump food into a corrupt distribution system that often gives food to those who need it least. The United States, which suspended its food aid to North Korea two years ago amid concerns about transparency, “has no plans for any contributions at this time,” said Kurt Campbell, the State Department’s top East Asia official. Meanwhile, the U.N. World Food Program, responsible for much of the food aid in North Korea, said its current food supply could sustain operations in the communist country for only another month. “We’re certainly hopeful that new donations will be coming in the upcoming weeks,” said Marcus Prior, the WFP’s spokesman in Asia. –Washington Post